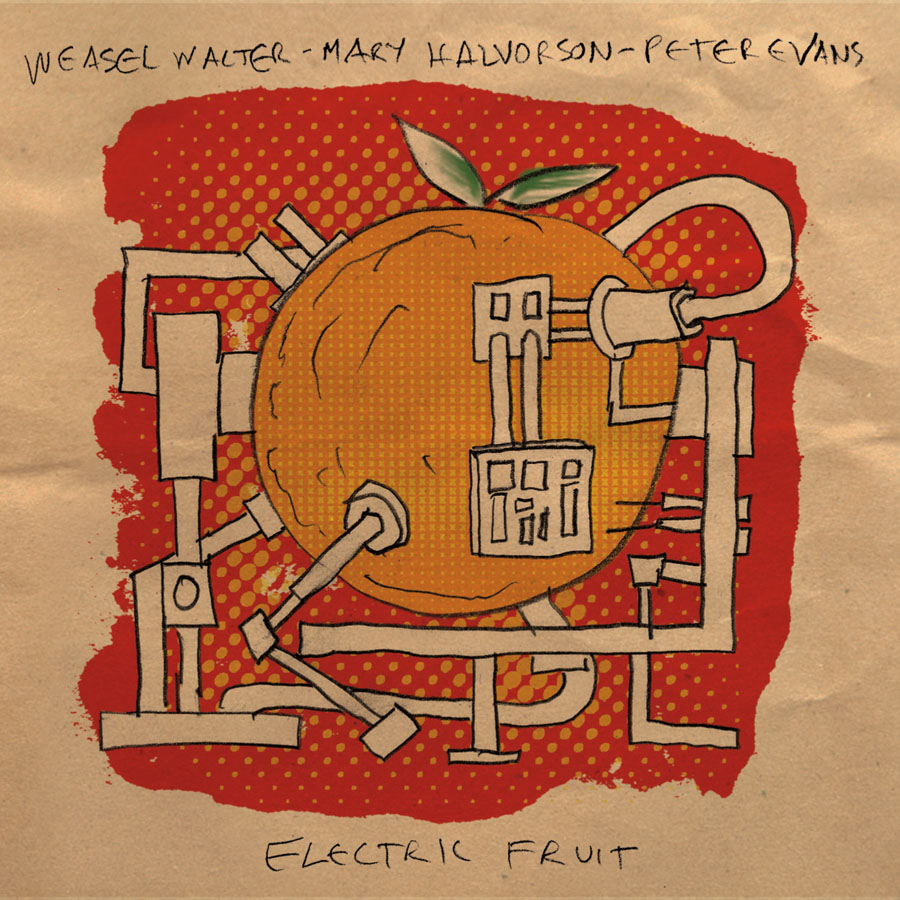 "Electric Fruit" alludes to the vexing encounter between nature and technology, one of the most complex issues that we face as a global society. The album brings together a powerhouse of innovators—Weasel Walter, Mary Halvorson and Peter Evans—to emphatically capture, question and explore the throes of this crucial contradiction. "Electric Fruit" is a stirring and potent recording of the dangerous confrontation between the innate and the artificial, the organic and the robotic. Each member of the trio brings their peculiarities, problems and powers to the table for a passionate discourse on the demands and constraints of modern music and the world.

The album features Peter Evans’s intrepid explorations of the sonic possibilities of the trumpet, as he delivers yet another performance that crackles with wit and boundless energy. Mary Halvorson’s alkaline, wiry guitar lines lend an angular linearity to the forms and force structural direction while displaying a tart sense of deliberate dissonance. Weasel Walter erects maniacal, asymmetrical frameworks for his band mates to dart in and out of as his transparent, high-velocity drum approach creates constant momentum and simultaneously implies multiple directions. The players’ distinct instrumental voices weave labyrinthine strands of counterpoint at rapid paces, intentionally intersecting and negating each other from moment to moment in attempt to reach as many disparate points of structural coherence as possible.

The group forges a frenetic, yet painterly style of modern improvisational music imbued with intense speed and density. The music is brisk, strange and articulate, presenting a dry and bizarre sense of humor and play. The goal of the group is to create a new kind of music beyond idiom, with maximum intellect, reaction and musicality.

Already established leaders in their own right, Walter, Halvorson and Evans represent the best of a coming generation of talent. Having performed throughout the United States and Europe for the past several years, the trio now presents its debut studio recording, “Electric Fruit.”

“Electric Fruit has an undeniable presence and reflects what's both doable and necessary at this point in time.” Clifford Allen, All about jazz

“ Have you ever dropped everything simply to appreciate how many different sounds exist in the world? If so, this may be the album for you. “-- Josh Langhoff, PopMatters

“These six improvised tracks act as a show-and- tell demonstration of the immense talents of tomorrow's—and, maybe today's—creative giants.” – Mark Corroto, All About Jazz

“Each improviser brings his or her own unique voice to the conversation to create a dramatic landscape of pauses, interruptions, yelps, mumbles, and barks.”- Elliot Sharp, Tiny Mixtapes

“Three of the most adventurous musicians on the contemporary improvisation scene, drummer and percussionist Weasel Walter, guitarist Mary Halvorson and trumpeter Peter Evans combine for a fascinating album of collective improvisation that is entirely impossible to categorize (in a good way.) “ Tim Niland, All About Jazz

“Though chaotic at times, listeners will locate moments where the instruments shift from libertarian solipsism to democratic cooperation.” -- Elliott sharp, tiny mixtapes